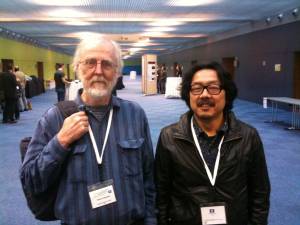 Python IP cookbook on the way

It's a bit surprising that there is not much information about Python Image Processing, considering it's potential. Most of the tutorial pages are about PIL module which only allows you to deal with 8-bit images.

I have been comparing Python IP and Java IP, and think that these two worlds could be complement to each other. Java is much stronger with Image Processing libraries but weak with statistics and numerical treatments. For the latters, Python is much more efficient. Python is also better for plotting graphs in 2D and 3D.

A new page dedicated for Javascripting with ImageJ and Fiji.

Drop Script Plugin for ImageJ is now available for download.

For easy access to use EMBL cluster for calculation using ImageJ, I tested using Jsch, a pure SSH2 implementation in Java (http://www.jcraft.com/jsch).

I made a ImageJ launcher that runs server-side ImageJ on local desktop (see GitHub repository ServerIJ). X should be ready for hosting the GUI. For further development, interface will be more boring as only some fields to input name of shell script and some options (path name to image files, macro or scripts) will be what you will see.