We now have a new book "Bioimage Data Analysis WOrkflow"published from Springer, topics of which are centered around bioimage analysis workflows. The book is open access - thanks to the support from COST Action. 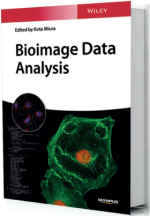 For sample image data and codes, please download from the following link:

The CMCI seminar has been either spontaneous or took a form of mini-symposium, but now in a new format.

Every three weeks, seminar member gathers and two of them present image analysis problems / solutions or reads a paper. For more details and the schedule, see this page. 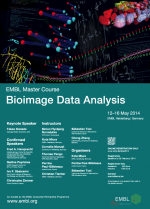 The 2nd “EMBL Master course on BioImage Data Analysis” will be in May. I , Sebastien Tosi (Barcelona) and Perrine Paul-Gilloteaux will be organizing the course. Here is the wiki page for this year.

I added biography of invited speakers, so please check if you are interested! By the way, we abbreviate the course title as “BIAS2014”.

The ImageJ plugin "Temporal-Color Code" was used for the analysis of the contraction of actomyosin gel and now in the cover page of Nature Physics, September 2013 issue. D. L. Taylor's “Solation-Contraction Coupling” hypothesis now on the move.

Thanks to José Alvarado for his kind acknowledgement and a big applause for his successful publication!

For strengthening the bioimage analysis community, we organize the first EuBIAS meeting in Barcelona. For those of you with problems such as:

Join the meeting and get to know top-developers, leading image analysts and biologist with similar problems!