I made some tiral using ImageJ and Bitplane Imaris (in Windows). software versions are:

To use ImageJ along with Imaris, install ImageJ plugin from Bitplane as they instruct in Bitplane website. Then start up IJ. A small window that looks like below appears: 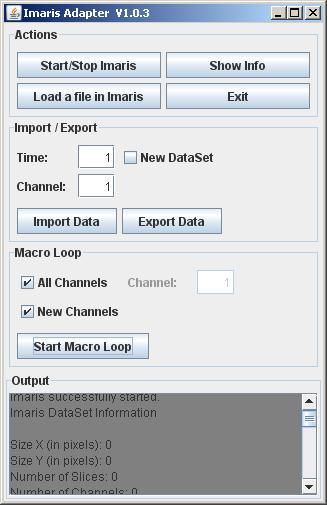 In this way, viewing 3D dataset in ImageJ stack could be viewed more comfortably in Imaris 3D user interface.

One obvious problem I encountered is when I tired to export 4D dataset from ImageJ to Imaris. I opened a 4D dataset with 8 slices (z) and 46 time points. Since ImageJ plugin interface above does have user input for time point, I input the time points number but this was some how not recognized and stack was exported as 368 slices z-stack.

→ Checking through the source code bpImarisAdapter.java“, I realized that exporting from IJ to Imaris is only available with single time point (value you input in the text field is a single time index, not the total time points). For this, 4D sequence (such as hyperstack) should be split into sepatate z-stacks and then exported to Imaris one by one. The method for exporting is

So probably, it will be same for channels: channels should be separated stack.

“Import Data” could pull image shown in Imaris into ImageJ, but “surfaces” constructed in Imaris does not appear (probably the same as above, single time point).

Macro file is available only with .txt extension, but it should also include ”.ijm“, IJmacro extension.

Macro executer is a method in Adaptor class:

This method basically import dataset (image in the current window, could include also multiple channels and time points), creates ImagePlus, apply macro, then after processing in IJ, The processed image is exported back into Imaris.

→ plugin would be better with more functionalities to import information such as surface, array of detected spot information, tracks, statistics.. and so on.